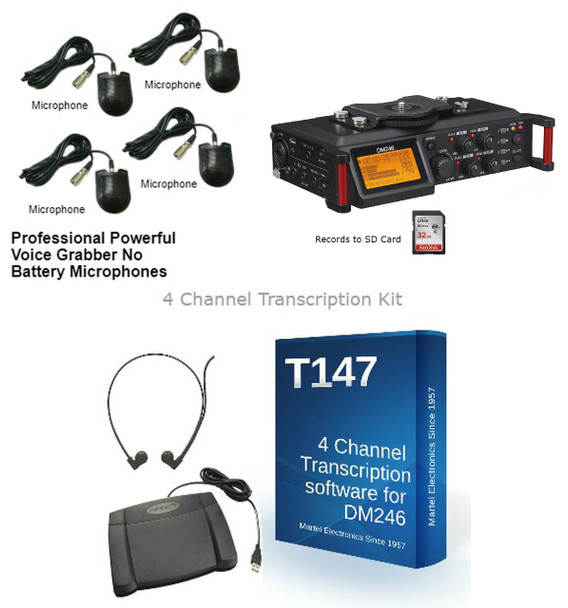 DM246 V2 Court Recording Equipment with 4 - Omni-Directional microphones spread out around the courtroom ensures complete coverage of every word. Each of these microphones has a pickup range of 36 feet. Also included is the transcription kit, which contains a USB foot pedal, headset and 4 track transcription software.

The Martel DM246 V2 is the most reliable of 4 channel standalone court room recorders. It is the direct replacement for the discontinued Sony BM-246 and Lanier Advocate 4 courtroom recorders.

The Martel DM246 V2 Four Channel Recorder is comprised of a special voice recording system that will capture every low volume voice, even in a noisy courtroom environment. The DM246 V2 has real-time confidence monitoring via headphones and "live" VU meter graphs, knob individual gain, and monitoring controls. Additionally, it has the ability to control each channel individually, isolating the microphone you want to hear by itself. It has AC and battery backup operation, plus built-in microphones that make it the worlds' only reliable 4 channel recorder available today for courtroom recording.

Tired of computer recording software that doesn't work, or have errors causing you to lose the entire record? We have the non-computer solution. Never worry about windows errors while recording, since it isn't a computer. Numerous Major Court Reporting Firms in Washington DC place large orders to outfit their reporters who cover congressional hearings.

The DM246 V2 was created specifically as a replacement for your 4 track court tape recorders. It has several key distinct advantages to Court agencies: Records 4 separate tracks of audio. Burns directly to a DVD for archiving. Records 22 hours of 4 track audio on a 32GB SDHC card, 4 separate channels, plenty for all day recording.

Voice Writers are using the DM246 V2 also. You can record the mask on channel 1 and the deposition or courtroom on the other 3 channels. Since you record in standard .wav format you can easily load the channel one into a voice recognition software such as dragon and get high accuracy voice recognition.

Today there is only one standalone Digital 4 channel court room recorder with the ability to cover an entire court room. You can add up to 8 separate microphones into the DM246 V2 court room recorder. We must stress that we are making only very limited quantities

MSRP: $1,699.00
Sale Price Now: $1,499.99
Was:
The Digital Court Report Recording Package  Need to outfit a courtroom with professional recording equipment, but you're on a budget? The Digital Cour
1122

MSRP: $299.99
Sale Price Now: $199.99
Was:
This Uni-Directional XLR courtroom microphone is made just for the DM246 court recorder. It is modified to receive power from the phantom po
1732

MSRP:
Sale Price Now: $49.99
Was:
This is a Hard shell carrying case for your conference meeting record.  The case is specially designed to transport an entire meeting recording system with room for microphones,...
2022