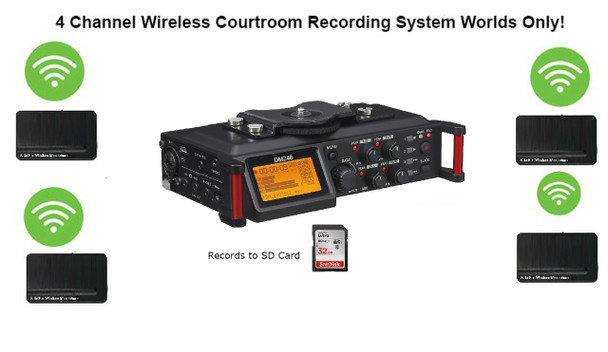 The DM246 records your .wav audio files to a SDHC memory card. Our engineers in the courtroom recording equipment division have designed systems that can be found in all countries courtrooms, convention centers, and boardrooms. Go portable with simple to build and assembled wireless setups, or combine it with existing courtroom wired installations. This wireless courtroom recorder is a plug and play wireless 4 channel system.

This special court technology wireless recording system was purposely designed to be used in a large courtroom. It features the ability to record up to four channels in crystal clear fidelity, and is quick to set up and tear down. Need more help designing a courtroom, call us, so we can engineer a wireless recording and transcription system for those who need more recording options.

If you are in an old courtroom and the acoustics are bad this package is the solution. The 4 wireless microphones will allow you to hear everyone, even if they are walking around. These special wireless microphones transmit on 2 separate channels. This means you won't have any drop out of audio from interference. No one can interfere with your wireless transmission.

No computer or software is required during the standalone recording court proceeding. This combination of equipment will allow superior voice sound, exact recording and transcription of up to 4 simultaneous channels for your court proceedings. We have taken this complicated recording equipment and designed it into a simple to use package that is turn-key for all our government agencies. Still keeping it under the $3000 price range for our federal customers means you can use your card to purchase this equipment.

Breakdown of each major part of the DM246 Court Room Recording equipment with its wireless courtroom microphones:

MSRP:
Sale Price Now: $19.95
Was:
The XLR Y Cable lets you plug in 2 microphones into a single microphone jack on your recorder. It has 1 male XLR jack and 2 female XLR jacks. This is especially important to professional audio...
223

MSRP:
Sale Price Now: $39.00
Was:
The XLR 50 Foot Mic Extension Cable provides added length for the microphone cables. This cable is shielded from interference from outside devices.
221

MSRP: $1,499.00
Sale Price Now: $999.99
Was:
Need to outfit a courtroom with professional recording equipment, but you're on a budget? The Digital Courtroom Recording Package fills this role perfectly. It includes 4 professional...
1122

MSRP:
Sale Price Now: $49.99
Was:
This is a Hard shell carrying case for your conference meeting record.  The case is specially designed to transport an entire meeting recording system with room for microphones, headphones,...
2022

MSRP: $299.99
Sale Price Now: $129.00
Was: $189.00
The All N One Transcription Kit from Martel uses the most advanced digital audio transcriber for processing voice. It is a complete, perfect solution for transcribing digital recordings. Buy from...
1040

MSRP: $1,499.00
Sale Price Now: $999.99
Was:
Need to outfit a courtroom with professional recording equipment, but you're on a budget? The Digital Courtroom Recording Package fills this role perfectly. It includes 4 professional...
1122

MSRP:
Sale Price Now: $999.99
Was:
Executive, Professional Conference Meeting Recorder package  If you are having important meetings with more than 15 people and you have to get a perfect recording, every time, and it has to be...
1919
Recently Viewed
Sorry, there are no products.
Top