I have talked to most the court reporters is in the country today, and the number one issue that they have in their minds is the poor quality coming from their audio sync court reporting software. Everyone is frustrated by the lack of quality in the records. So I'm going to set the record straight with definitive answer to your questions. I'm going to break it down to two categories, laptop recordings and steno machine recordings.

First, lets' talk about laptop recording, because it's what most of the court reporters are using in their work. Often times court reporters call me as they realize that their new laptop only has one input/output socket. This is often called a combo jack. It combines a microphone and a headset into one input, and is a disaster for court reporters. So when you buy a laptop you should be looking for a computer that has two jacks. One for a headset, and one for a microphone. The natural solution for this is a  USB Court Reporter microphone for reporters, that doesn't use an analog input. The problem with this is that most USB microphones are made in China with inferior sound quality. China USB audio adapter costs a few dollars to manufacture. This will reflect in your audio sync recordings. 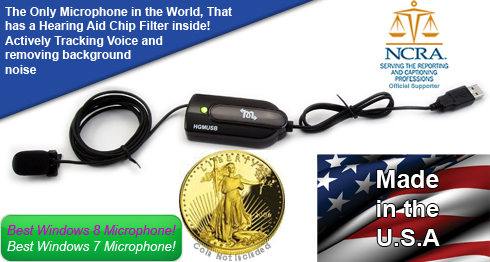 The next major mistake that court reporters make is, they buy their microphones from the East Coast. These microphones are often cheap imitations of the  Martel court reporter microphones. A cheap microphone just amplifies all the surrounding sounds (including background noise). This will leave you with a lot of extraneous noise and it will be very difficult for you to create an accurate transcript, not to mention taking up a lot of your time. All the Martel microphones are specifically designed for voice, and the quality that we produce is the highest in the world. Each Martel microphone is handcrafted in California to broadcast quality specifications. Another feature that makes the Martel microphones unique is the integration of a hearing aid IC chip inside. The hearing aid chip filters out background noise like air conditioners, paper rustling, and ambient noise. This cutting-edge high-tech filter is actively tracking human voice. Lastly, and just as important,  Martel microphones have a gain that turns up the volume when people are speaking in low or hushed tones. Additionally, the further voices are heard by the mic, it continues to turn up it's power. That is the reason why if you've used a Martel microphone, you will continue to use one for the rest of your career.

Now there's a lot of disinformation out there from the court reporter website forums. I hear court reporters saying that there's a $50 microphone that's great. Let me equate this to someone who's been driving around in a 1975 Ford Pinto their entire life. If I gave them a Bentley for a year, do you really think that they would still think they're Pinto is the best. Of course not, and this is the unfortunate recommendation from court reporters that I read on so many websites. Let me set the record straight, you get what you pay for when it comes to court reporting microphones. A high-end Martel microphone lets you produce ultra accurate transcripts in about half the time. You won't have to keep listening over and over again to the same words, because you understand it the first time you hear. 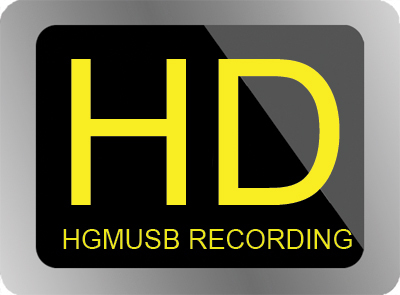 Let's revisit the USB microphones for a moment. The  Martel elite court reporter microphone has an HD sound card in it, that produces a sound field. So what is a sound field you might ask? The sound field gives you a left and right directional pick up of the voices just like in the movie theater. This is how your brain normally processes voice in communication, from your left and right year. This speeds up transcribing by around 25-30% The Chinese USB mic jacks/sound cards don't have this feature. So it's really important that you know where your microphone is manufactured.

One of the biggest questions I get is, how long do microphones last? If you buy a broadcast microphone to use on a TV show that costs you $10,000, it will still only last about 4 to 5 years. The reason is, there is a diaphragm in all microphones like a human ear that wears out over time. The conditions that make microphones wear out faster are usually humidity and heat. That is why court reporters in Florida will typically go through microphones in about three years. These conditions are not the microphones friends.

Court reporters often buy court reporting software that is hugely expensive, often $5000 to $10,000. When they get ready to use the software, they find that the recordings are inferior or have a lot of noise in them. This is the biggest complaint I hear, hands down. But when I asked them which microphone they are using, they tell me they're using an East Coast made microphone that cost them under a hundred dollars. After having spent $10,000 on software, I'm shocked they spent so little on such an important part of their equipment. Often I'll tell them to buy one of our microphones, and put it in a head-to-head with their old mic. If they think our microphone is not better, they can send it back for a full refund. They always call me back about a week later telling me how glad they were that they took the challenge. I always tell them to go back onto their Facebook page and social media and pass on what they've learned to other court reporters who are still struggling with her East Coast low end microphones.

Next, I'd like to set the record straight for steno writers. The microphones that a steno machine will use, needs a high gain input. What I'm about to tell you will shock most court reporters. But, if your microphone for your steno machine doesn't use a battery, you're missing 75% of your audio recording. The  Martel HGM2 steno writer/machine microphone has been engineered and re-engineered for the past 20 years just for steno machines and laptops. If you're using a microphone doesn't have a high impedance output, which includes microphones that don't use batteries, you were really shooting yourself in the foot. Often times these low end microphones won't even have a cable built into them, so when you add an extension cable you are adding noise and loss of voice signal even further. Also, the microphones without batteries have a huge defect, the pickup the sound of your typing on your steno machine more than peoples voices. This is because the diaphragm on the microphone cannot extend fully. So if you're using a steno machine, the HGM2 is the right microphone for you.

I hope this cleared up a very difficult topic that has been on the mind of all court reporters here in the U.S. The real facts covered in this article are hard to come by on the web. Very few people will give you a straight answer on why your audio sync court reporting software has such bad sound. If you take one thing from this informational article, it's that east coast companies sell inferior Chinese, non-hi-gain microphones for court reporters. Martel manufacture superior products in California, which has a reputation for cutting edge technology. If you enjoyed this article please share it with your court reporter friends on social media websites.

My next article will be: tuning your case catalyst and eclipse to get optimum recording quality out of both programs.