The only complete Stenomask Verbatim Package on the market. Get everything you need to start into the steno mask reporting industry. This is everything you need for use with Dragon Voice Recognition software. Since this court reporting kit has a Stenomask with 2 microphone cables, one for your recorder and 1 cable for the computers microphone socket for Dragon. You can do real-time Dragon voice recognition and record a back up at the same time.

This package includes the two channel recorder, we separate the channels for you, the  All N One Transcription kit, Dual Plug Stereo Stenomask, High Gain Live Microphone and stand. So you have been a court reporter for many years and you need new equipment. The digital court reporter equipment scares you, but you want something simple to use, well this is it. We have successfully switched thousands of stenomask court reporters from old units to the new digital reporter systems. We can help you. Where else beside Martel can you start a stenomask career for under $1000? 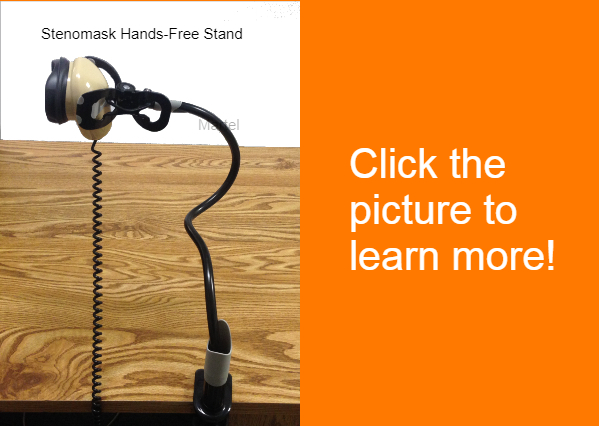 NEW Exclusive SD Memory Card Checking- Allows you to verify the card is working before you record.

Attention: Marantz has discontinued their widely used Marantz PMD671 recorder. This recorder has filled that role as the premier 2-channel steno mask recorder with recording verification via a third head. This is the direct replacement for the PMD671, with all the same features plus more.

MSRP:
Sale Price Now: $199.99
Was:
The XLR HGM-2 Court Reporter microphone has the same incredible pickup as the normal HGM-1 microphone, but has a three-prong XLR plug for use with Marantz and other brand professional recorders...
1007

MSRP:
Sale Price Now: $199.99
Was:
Martel's Stenomask with an XLR three prong cannon plug for verbatim voice stenomask reporters.  The Mini Stenomask unique design allows you to breathe comfortably through your nose. For those...
371

MSRP:
Sale Price Now: $799.99
Was:
This stenomask package comes with everything you will need to record and transcribe. It's a complete package.
1810

MSRP:
Sale Price Now: $999.99
Was:
Already have a stenomask and a courtroom room microphone? On a budget and looking to get into the stenomask verbatim reporting business? Here's the solution!Record, Rewind and Read back...
1866

MSRP:
Sale Price Now: $699.99
Was:
Martel 2 Channel Recorder for Stenomask Reporters  This is the best replacement recorder for your old Marantz digital recorders. It has 2 inputs on the front one for your mask and one for your...
1886

MSRP:
Sale Price Now: $499.99
Was:
Let your voice empower you at work or Court! Dragon 15 Professional For Court Reporters & Lawyers
1943

Wireless Stenomask -Only from Martel

MSRP:
Sale Price Now: $399.99
Was:
Please, only 1 order per Customer at this point!  DUE TO OVERWHELMING DEMAND PLEASE ALLOW EXTRA TIME FOR DELIVERY! Voice Writers: I bought this Dragon mask last week; got it yesterday. I'm...
1945

MSRP:
Sale Price Now: $199.99
Was:
The Martel Stenomask, featuring the 1/4 inch plug for use with the any recorder or mixer requiring 1/4 inputs. Due to the Virus, we experience shortages in Stenomask parts. At this...
369

MSRP:
Sale Price Now: $199.99
Was:
Martel's Stenomask with an XLR three prong cannon plug for verbatim voice stenomask reporters.  The Mini Stenomask unique design allows you to breathe comfortably through your nose. For those...
371